The Hawthorne Mall - How the Abandoned Plaza Looks in 2021

Although the Abandoned Hawthorne Plaza Mall was on my seemingly endless list of places to explore. How I got there was purely coincidental. I was filming a movie and it just happened to be the first location. I spent a lot of the day trying to both express and contain my excitement for the Los Angeles abandoned landmark. For the abandoned mall enthusiast, it's delivers. There are freestanding escalators, and down escalators that lead to nowhere. As far as abandoned malls go, this one has it all. Ghost Town Podcast:

For a little background on the mall itself, I leave that to the experts at Wikipedia:

"Hawthorne Plaza is a partially dead mall along Hawthorne Boulevard between 120th Street and El Segundo Blvd in Hawthorne, California. The 40-acre (16 ha) property opened in 1977 and included an indoor mall and free standing stores at the property's south end. The mall largely catered to the middle class residents living in and around Hawthorne and featured cheaper stores than other nearby malls such as South Bay Galleria and Manhattan Village.

Despite initial popularity, the mall went into decline in the 1990s due in part to the economic decline of the area after the cutbacks in aerospace jobs and to competition from other shopping centers. The mall's number of occupied stores declined from 130 in the late 1980s to 87 in 1994 and around 70 in 1998. By that year only one anchor store was remaining out of the original four. After the Macy's Clearance Center (which replaced The Broadway upon the latter's purchase by Federated Department Stores) closed down in December 1997, there were plans to put in an AMC Theatreon the site and to convert the mall into an open-air shopping center. Their plans never came into fruition, however, and the mall portion closed down in 1999.

The property's southern part was redone in 1998 and is still open. It includes a supermarket, a pharmacy, and some small restaurants. The mall building and most of its multistory parking lots are now abandoned except for a police training center that was built in the portion formerly occupied by Montgomery Ward. On the northern side is an annex administrative office for the Hawthorne school district. The abandoned mall has also been used to film a number of movies, TV shows, and music videos such as Minority Report (2002), The Fast and the Furious: Tokyo Drift (2006), The Green Hornet (2006), Teen Wolf (2011), Beyoncé's "Superpower" (2013), Gone Girl (2014), Lindsey Sterling's "Heist" (2014), David Guetta's "Bang My Head" (2014), Rush Hour (2016), Colony (2016), Westworld (2016), Taylor Swift's "...Ready for It?" and Travis Scott’s Astroworld Trailer (2018)."

What will happen with The Hawthorne Mall in 2021?

There are many rumblings of the mall being demolished to make way for an outlet mall. Some of the more recently plans, at least according to The Daily Breeze include, giving it a makeover to look like the Americana in Glendale (which I live dangerously close to).

The article goes on to say “The new development wouldn’t be a mall, but would include a large “power center,” or outdoor mini-mall, an office complex and walkable outdoor retail strips with upper-level homes. Courtyards and parklets are scattered throughout the plans and even included on the rooftop.

“The revitalization of the former mall must center on a development that is viable and reasonable in the context of the economy of both Hawthorne, the region and investors,” interim City Manager Arnie Shadbehr said. “It should meet the shopping and dining needs of the community but also be self-sustaining on its own to ensure long-term success and economic rewards for the developer, the tenants and the city itself.

“Ultimately, this development should erase the blight that has sat at the former mall site and help reinvigorate the heart of Hawthorne to instill pride in the community and help inspire economic growth.”

The plans call for retail shops on the first floor fronting Hawthorne Boulevard, topped with parking garages that would act as a buffer for upper-level residences. More than 800,000 square feet of offices would take up most of the eastern portion, and most of the project’s 600 homes would sit on the western part. Altogether, about 500,000 square feet of retail space is included, along with nearly 5,900 parking spaces.”

I'm not sure of it's immediate current status however, and can’t seem to find anything relevant on it’s progress, or lack of progress. As far as how I entered, I only recall going through what might have been a truck bay, but if you can see it, I highly suggest it. There was security there, although I'm not sure if it was supplied by production or they are always patrolling. I did see a few mattresses and evidence of people squatting, but not really sure of it's current state. See you at the mall!

I managed to get some video of the abandoned mall as well. 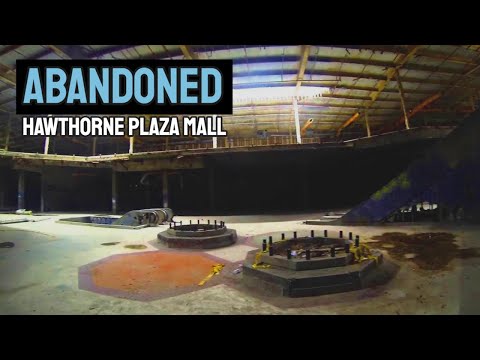