The Hills lived a normal life, like anybody else back in the 60’s in New Hampshire, USA. Barney worked with the United States Postal Service and Betty was a social worker. However, the couple became famous when the story of their alien abduction, or as they would call it, the “Zeta Reticuli Incident” on September 19th & 20th of 1961 became of public knowledge.

On the 19th, the Hills were driving back to their hometown in Portsmouth from a vacation when around 10:30 p.m. Betty Hill observed a bright light in the sky, sort of like a falling star but moving upwards. As the light seemed moving closer towards them, Betty urged her husband Barney to stop at the nearest picnic area and take a closer look at the UFO in the sky. As Barney started at the spaceship, he noticed it rapidly descend in his direction. The Hills quickly turned back to their car and started driving back towards their destination but realized the UFO approached their vehicle. Barney Hill, with pistol in hand, reached out for his binoculars and stepped out into the road. He claims to have seen around 8 to 11 alien figures with a similar resemblance to a human, who were staring out of the craft's windows and into them.

Realizing what he saw, he ran back to the car and told her wife Betty he believed they were about to be abducted by the aliens. He tried speeding away but was unsuccessful as the spaceship kept following them, as soon as it reached them, the Hills manifest to have lost consciousness for a moment and felt their minds dulled. When they came back to their senses, they realized they had travelled approximately 35 miles away from their last spot with no recall whatsoever of how they got there.

Two days later, on September 21st Betty called the Air Force Base to report the UFO incident encounter and got called back for an interview the next day with Major Paul Henderson. The report dated on September 26th determined that the Hills had probably misidentified the planet Jupiter. The report was then forwarded to Project Blue Book, the U.S. UFO research project but was shut down on December 1969.

Betty started having nightmares around November of 1961 and continued to keeping a journal of them where she described them as vividly as possible, hoping this would help her remember more details of those nights. In one of those dreams, she remembered walking into the forests with two humanoids surrounding her with Barney following right behind. She described the aliens as nearly humans, with hair, dark eyes, nose and lips, just like a regular face except the skin was a grayish sort of color. She also dreamt she was being examined in a sort of room, with her was the alien she called “The Examiner” and was appeared to be “The Leader” of the spaceship. She remembers being able to understand them as if they were speaking English but the language was entirely different on its own. “The examiner” told Betty Hill he would conduct a couple of tests to examine the differences between humans and the craft's occupants of the spaceship.

He commanded her to sit on a chair as a bright light was shone on her fur further examination. “The Examiner” man proceeded to cut off a lock of Betty's hair, examined her sight, hearing ability, mouth, as well as her teeth, throat and hands as he also saved trimmings from her fingernails. After examining her lower body - legs and feet - the man used a sort of dull knife - similar to a letter opener - to scrape some of her skin. He then proceeded to test her nervous system and introduced a needle into her body, which caused Betty agonizing pain, as any normal human would experience, where she witnessed “The Leader” wave his hand in front of her eyes and made the sensation of pain disappear.

“The Examiner” left the room and Betty decided to engage in a conversation with “The Leader". She picked up a book with rows of symbols and what appeared to be their native language that “The Leader" agreed she could take home with her for further comprehension of the experience. She also asked a couple of questions like where he came from as he pulled down an instructional map dotted with stars, like a galaxy. In another one of Betty's dream, the aliens began escorting the Hills couple back to their car from the ship when a disagreement broke out between the craft’s crew. “The Leader” then informed Betty that she couldn't keep the book after all, stating that the craft members had decided she should not remember the encounter.

Betty Hill insisted on assisting to hypnotizing therapy with her husband Barney and they began with Simon the hypnotizing session on January 4th 1964. He began hypnotizing Betty and Barney several times individually until June 6th of 1964, in which Barney stated that he and Betty were taken into the spaceship where they were separated. He was then accompanied to a room by three of the humanoids and told him to lie on an exam table. Unlike Betty, Barney's narrative of the experience was less detailed as he kept his eyes shut for most of the exam. The only thing he could explicitly remember was that the few times he had communicated with the aliens; it appeared to be through telepathy. Both Betty and Barney stated that they hadn't observed their mouths moving when communicating with them.

Years later, the Hills claimed to have found the spot where they were captured on Labor Day of 1965 and wrote a novel of their “Zeta Reticuli UFO abduction” and their encounter with aliens. 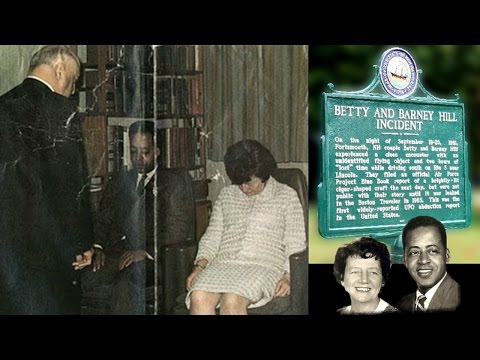